Nestled between its coed counterpart, Volo’s first women’s basketball league began to flourish. Some of the most highly sought after female players in the coed league had joined forces to claim a boot of their own, and so they did. The Golden Girls were able to claim Volo’s first women’s league boot over the Utah Jazz Hands by a score of 45-34.

The season prior to its release I was asked if I thought an all women’s basketball league would garner enough interest. “Without a doubt,” I said without hesitation. I had seen these girls play. The competition was fierce, and female free agents only stayed as free agents for a season before they were recruited to a permanent home. A lot of girls grow up playing basketball, and there are several differences in gameplay between the women’s and men’s game that would support the creation of the league. Just as men crave their own space in sports, so do the women. The timing was perfect.

Even with that recommendation, the league was expected to sell the bare minimum: four team spots or forty female registrants. Coed ball would take the lead on Tuesday nights at FSK, operating the majority of the game time slots. Then the unthinkable happened. The women’s league sold the same amount as the coed league. This threw a welcomed wrench into schedule creation, and the regular season lasted eight weeks as a result! I’m not one to brag, but an “I told you so” was definitely in order. 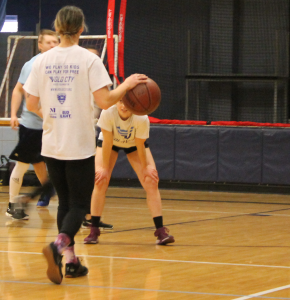 I’ve been playing basketball since I was 7 years old, and for a low-stakes recreational league, I played some of the most well-rounded and collaborative teams I’ve ever seen. The Utah Jazz Hands, in particular, tore my poor team of free agents, You Better HOOP Baby, apart. They moved the ball well, attacked the basket with finesse and had shooters to boot. We’d have our night later in the season, winning man-down in the first round of playoffs in a stop clock-worthy match against Girls from the Block, another fierce competitor throughout the season.

Some of us can probably attest to the fact that many of the girls playing in coed were impressed that a women’s league even came to fruition and were excited to give it a try next season. Honestly, you don’t even have to give up coed basketball to play in the women’s league! You can get your fill of basketball all in one night!